The inspiration for my artwork stems from a lifelong fascination with the beauty of nature and natural patterns. I enjoy using both iridescent and dichroic glass to give my fused glass pictures a different look in transmitted versus reflected light. I also love the relief and depth of view that can be achieved by adjusting the fusing temperatures. Each piece is an experiment, and it is very exciting to open the kiln and see the results of the fusing process.

In addition, I enjoy other experimental aspects of the technique, such as using mica powders, metal foils or small watch parts between the glass pieces. Fusing different pictures on both sides of the glass challenges my creativity to achieve a certain appearance with mixed colors. Some of the glass changes colors when fused or blended in interesting ways.

I also love taking photos of my surroundings, especially while travelling. In cities, I photograph building reflections, and in the country, I take photos of nature. Using Stacy Smith’s techniques for fused glass powder printing, I have had a lot of fun creating posder prints from some images or combinations of images I have collected over time. I love the contrasts from using a few colors, and the textural effects achieved from fusing at different temperatures. My friend John Cavallito took the photos that were inspirations for the water droplet pictures.

Please contact me for more photos or prices on any of the pieces pictured below, or see my commissions page for examples of custom artwork and approximate prices.

Gene knock out and control (sold)

Tardigrades on the Moon (sold)

Attack of the flying pigs

Beauty and the Beast

Through the Vines (sold)

Racing for burgers with boom-boom sauce

Electric Avenue – Down in the Streets!

Rock On! Down Under

Moon Rise Over the Mountains (sold)

How the Scots do it

Imprisoned in My Mind 2

Playing in the wind (sold)

Snail tracks in the sands of time

Through the microscope (sold)

Out of the Blue (sold)

Escape of the Amoebae [sold] 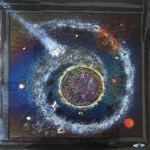 Microcosm in Time and Space

More than one Solution

Stress is in Our Genes [sold] 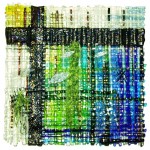 Heart of an Onion